In addition to purchasing online by clicking 'Buy Now' above, you may mail a check for the amount of $25 plus $5.00 shipping and handling per book, to the address below.

If you would like the book either signed or even personally autographed, please print the name clearly.

This new full-color booklet is on sale now for $10 plus $6 shipping and handling per booklet. 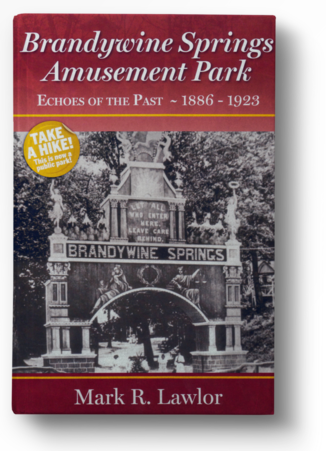 visit the park
for yourself 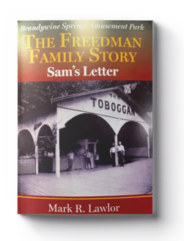 The early days of Brandywine Springs revolved around a hotel started in 1826 to bring people to the mineral springs that were believed to have healing powers. The hotel resort thrived until the Civil War, then became a military boarding school, which burned down in 1853.

A second smaller hotel was built, which did not fare so well until 1886, when a 36-year-old named Richard Crook leased the hotel. He soon found that the small games and rides that he added down in the cool woods below the hotel were much more profitable than the hotel. He added a merry-go-round and a roller coaster, and then had a trolley line built from Wilmington to the park. He later added a funhouse, a roller rink, a bandstand, a larger roller coaster, and a dance hall.

The amusement park was very successful, from 1900 to around 1916, when trolleys started to decline because of the freedom brought by the automobile. The park closed at the end of the 1923 season, and was neglected and forgotten for decades. In 1952, it became the first state park in Delaware, and control was turned over to New Castle County Parks in 1970.

On sale now for $25 plus $10 shipping and handling per book.